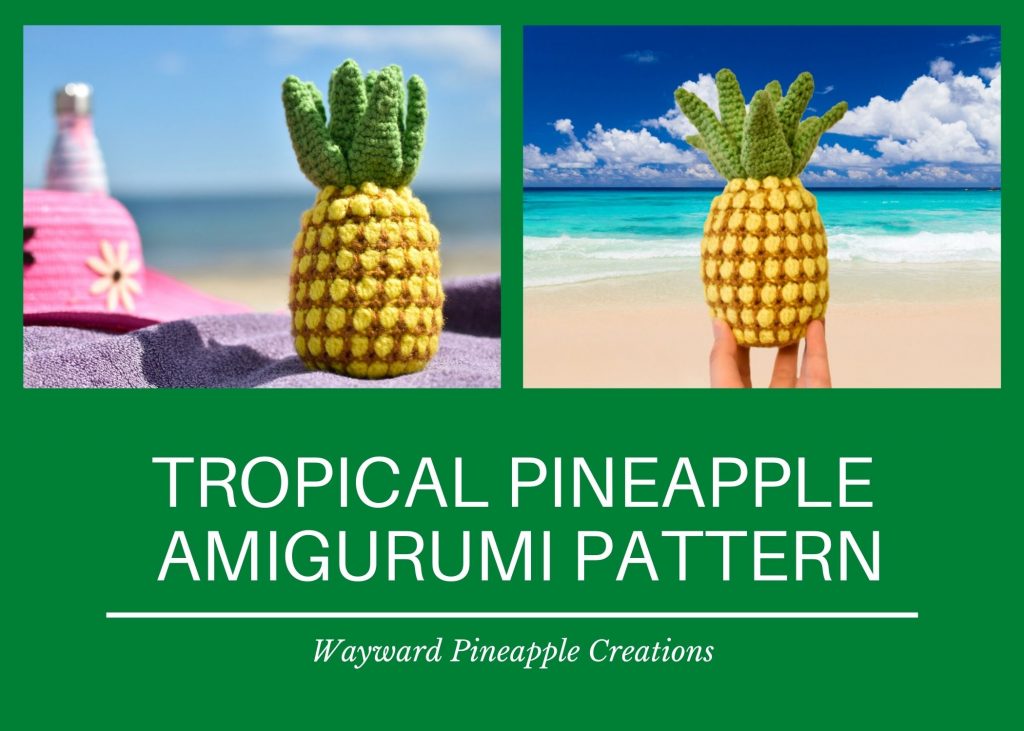 Affiliate Links Disclaimer:  This blog post contains affiliate links and I make a small commission off any purchase you make when you click on them.

Happy February! How is everyone’s winter going so far? Are you loving the crisp air and taking every opportunity to hit the slopes, or are you yearning for the warm breezes and beach days of summer? No matter the answer, I think everyone can benefit for bringing a little slice of the tropics into their home this winter!

I’ve been meaning to create a pineapple amigurumi for a few years now, to go with my company name, and I finally got around to it in the Fall of 2019. The pineapple went through a few iterations, and I struggled with making the bobbles stay relatively in line with each other from top to bottom, but in the end I’m happy with the result. This Tropical Pineapple Amigurumi is perfect to brighten up your house, or to confuse your guests when you include it in your fruit bowl!

I’m super excited to share my Tropical Pineapple Amigurumi with you all. After all, I did name my company Wayward Pineapple Creations. But why pineapples, you may ask? And why is the pineapple wayward? How can a pineapple even be wayward, and what does any of this have to do with crochet? All excellent questions, and I promise there are answers… I can’t promise they’re GOOD answers, but they do make for a fun story at least.

Curious? Read on! Not so curious? Skip straight to the pattern links!

The Tropical Illuminati & the Birth of Wayward Pineapple Creations

In Summer 2017, I made the decision to rebrand my old blog and give it a facelift. My biggest struggle was coming up with a name, and I spent ages brainstorming and getting nowhere. I went through a ton of generic boring crochet and geek related name ideas, but none of them clicked. Anything fun or clever seemed to have been taken.
Enter, pineapples.
Pineapples came about for a few reasons. First, they are yummy. Second, I had a minor obsession for awhile with pineapple-related imagery thanks to my fling with the Psych fandom. Third, and most importantly, I had recently discovered the existence of a secret and dangerous organization… one that could probably get me killed for even mentioning it… a dark secret hiding behind the pineapple and flamingo imagery that permeates summer… the Tropical Illuminati.
You’re probably wondering now, what the holy pineapple-y hell is the Tropical Illuminati and what does it have to do with any of this?
The not-so-short version is, in the spring of 2017 some friends and I embarked upon the grand Canadian tradition of a day trip across the border to purchase goods at somewhat cheaper prices and at exciting stores we do not possess, such as Joann’s Fabrics, Dress Barn, and Trader Joe’s. As we entered store after store, a terrifying pattern began to emerge. Pineapples, flamingos, and palm trees. Everywhere. In every store. In every window display. They were following us, haunting our dreams.
We returned to Canada, thinking we were safe up here in the frozen Arctic with our moose and beavers, but the pineapples and flamingos persisted! They could be found at every turn, in the most unexpected places. Just when we thought we were safe, another would emerge. Our friend dubbed this strange phenomenon the ‘Tropical Illuminati’, a grand worldwide conspiracy to lull us all into a sense of false complacency with cute tropical images before beginning the true invasion.

…or it was just the start of summer. Either seemed equally likely.

Anyway, the point is I spent a ridiculous summer making silly jokes about flamingos and pineapples, and buying merchandise in their images such as super tacky porch lights, so when the time can to name my blog it was on my mind. I had already come up with ‘wayward’ because I wanted something to connote travel and wandering, to go with my Baby Groot travel photos. It was very nearly Wayward Geek Creations. But it just lacked a certain… something. (Something pineapple-y?) Eventually I decided to just embrace my own weirdness and name myself something fun and a bit kooky and inexplicable.

And thus, the Wayward Pineapple was born.

I needed a logo to go with my shiny new name, but had no logo designing experience nor the money to pay someone else. I have some drawing ability, though, so I spent about an hour sketching random pineapple designs. Eventually I hit upon the idea of making the pineapple look like a ball of yarn – complete with crochet hook! And if you actually made it through reading the above drivel about the Tropical Illuminati, you may notice that the hook is pink… because the flamingos are in on this too, the feathery bastards.

Update March 2021: Since this was written, I ended up redoing my logo – same concept, but I like it way more. Below you can see both of them and compare!

And now, on to the reason you’re all here – my Tropical Pineapple Amigurumi Crochet Pattern!

In addition to the benefits above, your support will be greatly appreciated and will help me to continue designing and offering patterns to you!

I hope you enjoy this pattern, and if you have any questions please don’t hesitate to comment below or email me.

And if you made your own pineapple I would love to see a picture on Instagram! Make sure to tag me so I don’t miss it, @waywardpineapplecreations. 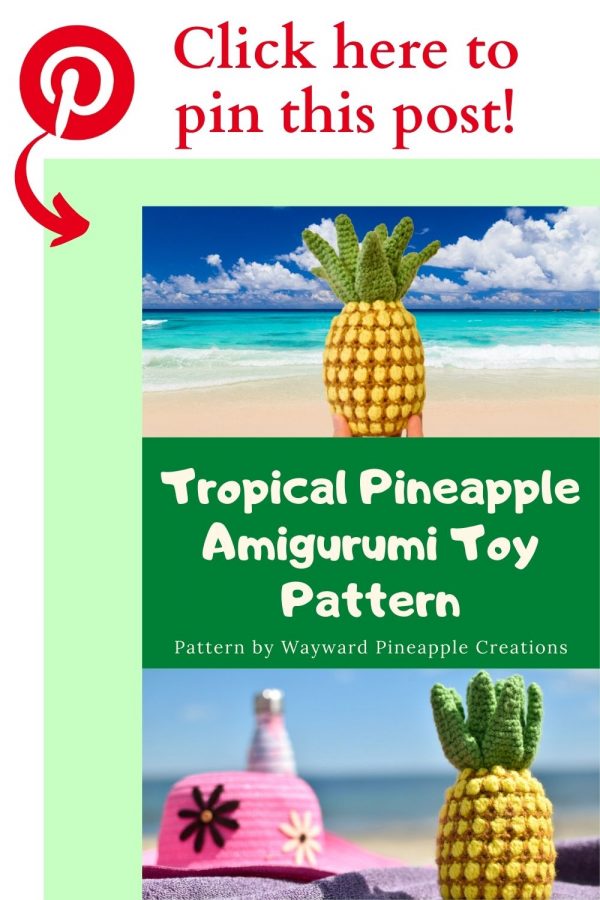 Well, if you made it through all that, congratulations! You are now ‘in the know’ about the Tropical Illuminati, and thus immune to their cunning plans.

…Or are you? After all, if you just purchased my pattern to make your very own stuffed pineapple then you’re letting them into your home. Now the pineapple is sitting on your kitchen counter… watching, and waiting.

© Wayward Pineapple Creations | Julia Simpson  This pattern and all related images are copyright protected. You may sell items made from my patterns, but please do not copy/paste, distribute, or alter the pattern and claim it as your own.

7 thoughts on “A Conspiracy of Pineapples: Pineapple Amigurumi Crochet Pattern”